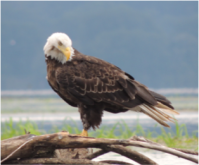 Paddling the Mississippi River, one of our greatest joys was spotting the white heads and tails of bald eagles amidst the foliage, then watching as they launched from the trees to soar majestically through the sky, escorting us down the river corridor. So, you can imagine my delight when my friend, Mary Ann, told me that her husband helped to band and track bald eagles during the years when they were listed as an endangered species in many states. In fact, Chuck Sindelar was recognized by the Wisconsin DNR as a “Comeback Champion” for his efforts to help monitor the state’s bald eagle population during this troubling time.

History is filled with stories of comebacks – brilliant returns from all kinds of adversity. Each story is inspiring in its own way and holds the capacity to teach us about perspective, creativity, optimism, hope and perseverance. But, one particular story has touched generations of Americans – that of our esteemed national symbol, the American Bald Eagle.

In the early years of our country, bald eagles were plentiful. Adopted by Congress in 1782 as our national bird, the bald eagle represented majesty, strength and freedom. As the human population grew and moved westward, however, the eagle population began to decline. Building, logging, and farming encroached on their natural habitat and eagles were often shot as potential threats to livestock and as hunting and fishing competitors.

The Bald Eagle Protection Act of 1940 made it illegal to kill eagles, disturb their nesting sites, or possess eagle feathers, eggs, or parts. Widespread use of a newly developed insecticide called DDT, however, caused toxicity problems with eagle egg development. The bald eagle population declined to only 417 nesting pairs by 1963.

Last month, Gene and I had the chance to meet Chuck and to talk with him about his work with eagles. Mary Ann welcomed me with a warm hug, then did the same to Gene. “Thank you for coming,” she said. Chuck, comfortably dressed in a white shirt tucked into blue jeans, shook hands and led us into their ranch home. Photos and collections lined the walls and filled the counters, bearing witness to the varied interests of this couple during more than fifty years of life together.

After taking seats in the living room, Chuck regaled us with stories of his interest in birds of prey, including four years of osprey studies, a Conservation Degree from UW-Stevens Point, and migration studies with peregrine falcons, owls and hawks. He began recording the locations of eagle nests and banding young eaglets in 1965, just two years before the bald eagle was listed as an endangered species in 43 of the 48 contiguous states. As he talked, I remembered learning about the plight of the bald eagle back when I was in middle school and recalled my worry when they were added to the list of endangered species. “I banded young eagles from ’65 to ’89,” he said. “But I didn’t do it all by myself. Ron Eckstein and Dave Evans worked with me. Between the three of us, we banded over 3000 eagles.”

Chuck placed a stack of topographical county maps on the coffee table, spreading one out flat for us to see. Color-coded circles surrounded dots, representing nests, scattered around Marien County. “How did you find all the nests?” I asked. 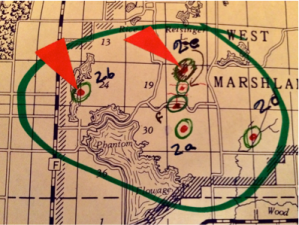 “Well,” he said, settling back in his chair, “They’re a lot easier to see from the air. So, even though I don’t like to fly and I don’t much like heights, I hired a pilot to fly over each county. The nests were often five to six feet wide, so they weren’t hard to see. I liked to go best in the early spring, when there was still some snow. The snow in the nest made a big white circle that was easy to see from above. If there wasn’t snow and the eagle pair was in the nest, their white feathers also helped.”

“When I first did this, I didn’t get paid,” Chuck admitted. “My first wife -” he looked over at Mary Ann, who just smiled back, then continued, “- worked to pay the bills.”

“And to let him follow his passion,” Mary Ann added her perspective. “I worked as a medical secretary,” she went on to explain, “typing medical records. And took care of our girls.”

“She also helped type my reports,” added Chuck. “I couldn’t have done it without her. But I call her my first wife so she won’t get too comfortable.” He smiled at what I figured was an ongoing joke between the two of them.

“What kind of plane did you use?” asked Gene. I could always count on him to show interest in technical matters.

“The first pilot I hired was a fishing guide,” Chuck explained. “He had a little wing-under plane. It wasn’t easy to see past the wing, so I had to keep telling him, ‘Go lower…AND slower.” Chuck laughed. “He didn’t like that very much. Years later, when the Fish and Wildlife Service hired me and when I got a few contracts from the DNR, I got to use a pilot who flew for the government, John Winship. His plane was one of the only ones that had those belly cameras, so we could take pictures while we flew.” 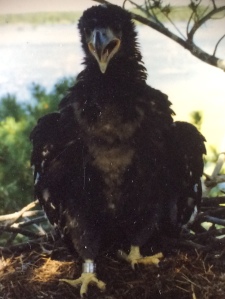 Chuck went on to explain that he’d make two flights over each nest in the spring of each year: one to find out which nests had eagle pairs incubating eggs, and a second time to determine how many of the eggs hatched. Then, when the eaglets reached the right age, he would locate the trees on foot, don spiked lineman’s boots and climb as high as 125 feet to band the young eagles. “About three weeks old was the best time to band,” he explained. “Earlier than that, their feet could slip right out of the bands. But any later, and they’re harder to catch. Sometimes the babies hopped right out of the nest onto the tree branches and a few  even tried to fly!”

“What if the parents were in the nest?” I asked.

“We didn’t climb up until they left the tree to get food for the chicks,” Chuck explained. “If they returned while we were in the nest, they’d just land in another tree and wait until we left.”

Some eaglets were sent from Wisconsin to help populate other states.

After the US banned DDT use in 1972 and Canada followed a year later, bald eagles started an amazing comeback. Wisconsin did so well that sometimes, other states would request young eaglets to help establish populations in their states. “If there were three eaglets in a nest,” Chuck said, “once they were old enough, we’d sometimes put one in a wooden box to send it to another state.”

Chuck found it satisfying to see the increase in breeding pairs and see how far his birds traveled. “Take a look at this,” he said, placing a small map in front of me. Lines originating in Wisconsin radiated out in all directions to locations around the country. “When people find banded birds,” he explained, “they report it and I get an email that tells me who found it and where. I keep a record of each one.” A lot of them are in Wisconsin, but this map shows the ones that traveled farther.” I noticed that the lines on the map reached as far south as Texas and Florida and as far west as Idaho.

“They think there are a lot more now,” he said. “More like 18,000 pairs, I think. But they don’t study it anymore, so there’s really no way of knowing. It’s just a guess.” Just the fact that the eagles are secure enough not to need continued monitoring felt, to me, like a huge win.

“Thank you for spending time with us,” I said to Chuck, as we prepared to leave. “And for all you’ve done. You have such wonderful stories.” Another hug for Mary Ann, and we turned to leave. In what seemed like no time, two hours had passed, listening to the stories of this man – a central figure in one of the most significant wildlife recoveries of my lifetime. A man who loved eagles enough to sacrifice time with his family and financial reward to help increase our understanding of them and to identify, document and protect their nests and young. I will be forever grateful.

(Background information used for this story was obtained from the following websites: http://www.dnr.wi.gov, http://www.nationaleaglecenter.org, and from an article written by Paul A. Smith (1/18/2012) for http://www.jsonline.)

Order from an Independent Bookstore Near You